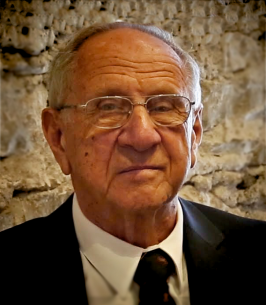 Passed away peacefully at Grand River Hospital, Kitchener on Thursday, September 8, 2022 at the age of 90 years.

A special acknowledgment is owed to his lovely dance partner and close friend Joanne Kruse, who was a big reason for his continued good health in his senior years.

Ron was born to Carl and Minnie Shaver in Hamilton, Ontario and moved to Kitchener as a boy, attending KCI where he excelled in shop classes and played for the football team. It was there that he met his beautiful wife Jeanette and not long after they were married and began a family, raising four lively kids who were a handful but were also the joys of their lives. They never hesitated to sacrifice time and money to ensure their kids had opportunities to do whatever they dreamed of, sending all four to post-secondary education and onto fulfilling lives of their own. Ron and Jeanette were true hockey parents, spending many hours watching their kids, and then later, their grandkids play, and made many warm friendships at those cold arenas.

Ron was a good friend to many, who especially valued his talents as a handy man, always willing to lend his skills in many areas to help others, including his close-knit group of fellow cottagers at Turnbull’s Grove near Grand Bend, where he enjoyed many games of beach bocci and blackout bridge. He was also generous, donating to many charities and good causes, and volunteered as a Big Brother when still a young dad, despite having four kids of his own to look after. Ron was a lifelong member of the Lutheran church.

Ron was a licensed electrician as a young man, but soon branched out into a varied work career that eventually led him to found and run a very successful business, Shaver Industries, which continues to grow and thrive to this day.

Up until his very recent health issues, Ron lived life to the fullest. As late as this past winter, he continued to be an active and expert skier and was a life-long member at Chicopee. He was a very talented dancer, and also enjoyed swimming, wind-surfing, travelling, Oktoberfest and most of all, any gathering of his large and growing family where hotly contested games were always on the agenda. Never one to shy away from sharing his (usually quite strong) opinion, he enjoyed a spirited debate about any topic under the sun.

He will be missed but not easily forgotten by all who crossed paths with him.

Special thanks to the staff at Grand River Hospital ER, ICU and Stroke Ward for their professionalism, compassion and mostly, for their kindness.

A celebration of life will be held for family, friends and acquaintances at Pine Valley Chalet,1600 River Rd. E., Kitchener on Thursday, September 15, 2:00-5:00 p.m. with a dedication service to Ron’s well-lived life at 2:30 p.m. Although this gathering will be mostly outdoors, it is respectfully requested that attendees follow Covid protocol where appropriate.

In lieu of flowers, condolences for the family and donations to Food Bank of Waterloo Region or The Heart & Stroke Foundation would be appreciated (cards available at the funeral home).