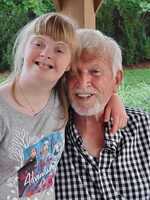 Passed away peacefully, surrounded by his family, on Tuesday, April 26, 2022, at St. Mary's Hospital in Kitchener at the age of 74. Loving father of Cheryl Miller (Glenn) and Jason (Lori). Cherished Grandfather of Jordan (John), Brooke, Billy (Alisha), Kayla, Braeden, Payton, Kailyn and Cameron, and Great-Grandfather of James and Wyatt. Dear brother of Doug (Gai) and Russ. Fondly remembered by niece, Wendy. Predeceased by parents, Russ and Peggy.

Growing up on air force bases, it was little surprise that Peter would follow in his father's footsteps to pursue a career in the RCAF. Peter applied and was accepted into the military education system and attended Royal Roads University in Victoria, BC, from 1966 to 1968 and then RMC (Royal Military College) in Kingston, ON, from 1968 to 1970 whereupon he earned his Bachelors of Science degree. Unfortunately, Peter’s hopes of pursuing a career with the air force was dashed when he sustained an eye injury while playing for the Royal Roads varsity hockey team. He was an exceptional hockey player. Peter continued his studies and transitioned to the Royal Canadian Navy. Peter had many great experiences there. Some highlights included: swimming right in the geographical middle of the Pacific Ocean, and serving as the Drum Major for the Royal Roads marching brand. Upon graduation from RMC, Peter received an honorable discharge to pursue an alternate career path in civilian life. The discipline and leadership qualities that Peter absorbed and demonstrated, served him very well.

Personally, Peter was known for his big smile and welcoming personality. He always had a joke or an amazing story to share that could raise anyone's spirit. He enjoyed people and was never reluctant to help others. Often you would see Peter at the soccer field, baseball diamond, or hockey arena cheering for his grandchildren. He also had the patience of a saint, teaching his grandchildren how to drive for the first time. Peter loved to spend time with his family. He enjoyed coming over for a swim, a walk, playing with the dogs, watching sports, or just sitting and talking. Peter loved his family get-togethers. He loved all the great food and especially the leftovers he could take home . He enjoyed being in the outdoors: reading a book at Riverside Park, fishing along the Grand River, or going camping at Algonquin Park with his Kayak. Peter made balancing rudders for his kayak that he was very proud of. Peter loved to be busy fixing things like his 1991 Volvo. Peter participated yearly in the WWDSS Buddy Walk and Upside Down Golf Tournament, where the tournament organizer referred to Peter as the "Shining Light" for his big positive personality. Peter attended Hespeler Baptist Church and was passionate about his love for God, and took every opportunity to share his love.

Special thanks to the incredible doctors and nurses at St. Mary's ICU unit which made Peter's 20 days as loving and caring as possible. In the early stages in the ICU the medical staff would play classical music in his room, and more than once Peter was observed singing.

As an expression of sympathy, donations to the Heart & Stroke Foundation of Canada would be appreciated by the family (cards available at the funeral home).