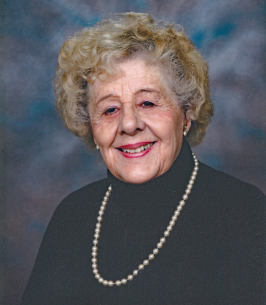 The heavenly chorus has gained an angelic voice with the peaceful passing of Anne Dlugokecki (nee Nowak) on November 18th, 2022 at the age of 93. Beloved wife of the late John Dlugokecki (2005). Devoted mother of Lucyll and Willy (Fleras), Rick and Pam (Strong), Laurie, Ron and Anne (Pihura), Lynne and Jerry (Quigley), Ray and Annette (Friedrich), Lisa and Sean (Bredin). Cherished Grandma Duke to seventeen grandchildren and nine great-grandchildren.

Anne’s life was devoted to her family, faith, and her singing career. She was an active member, organist and choir director of St. Anne’s Catholic Church for many years. While raising seven children, she made a name for herself as a mezzo-soprano, performing lead roles in K-W Musical Productions, K-W Opera Guild Productions, Silver Stars and other opera companies. She was a chorus member of the Canadian Opera Company for several years.

Anne’s life was a testament to the healing and transformative powers of music. Music sustained her while she cared for her family. In her years of declining health, music became her mode of communication. Even when she could no longer speak, she could sing. This gift has been given to her children, grandchildren and great-grandchildren of whom she was so incredibly proud.

Anne’s family are very grateful to the caring staff at Lanark Heights.

Anne's family will receive relatives and friends at the Henry Walser Funeral Home, 507 Frederick Street, Kitchener, 519-749-8467 on Friday, December 2nd from 4:00-8:00pm. The funeral liturgy will be held in the funeral home chapel on Saturday, December 3rd at 10:30am. Reception to follow. Private Interment at Memory Gardens Cemetery (Breslau, ON).

Those unable to attend may view Anne's funeral via livestream at https://www.henrywalser.com/live-streaming

As expressions of sympathy, donations to the Grand River Hospital Foundation - Cancer Centre or the House of Friendship would be appreciated by the family (cards available at the funeral home).